Currently, there is no good way to find the drainage area values of segments where the river splits, braids, and eventually comes back together. The Flow Accumulation tool can only model a single river, and so gives segments either a much higher value than they should have, or a much lower value. Sometimes, the Flow Accumulation line doesn’t accurately line up with the real world dominant stem. An example of this problem is depicted in the pictures below. 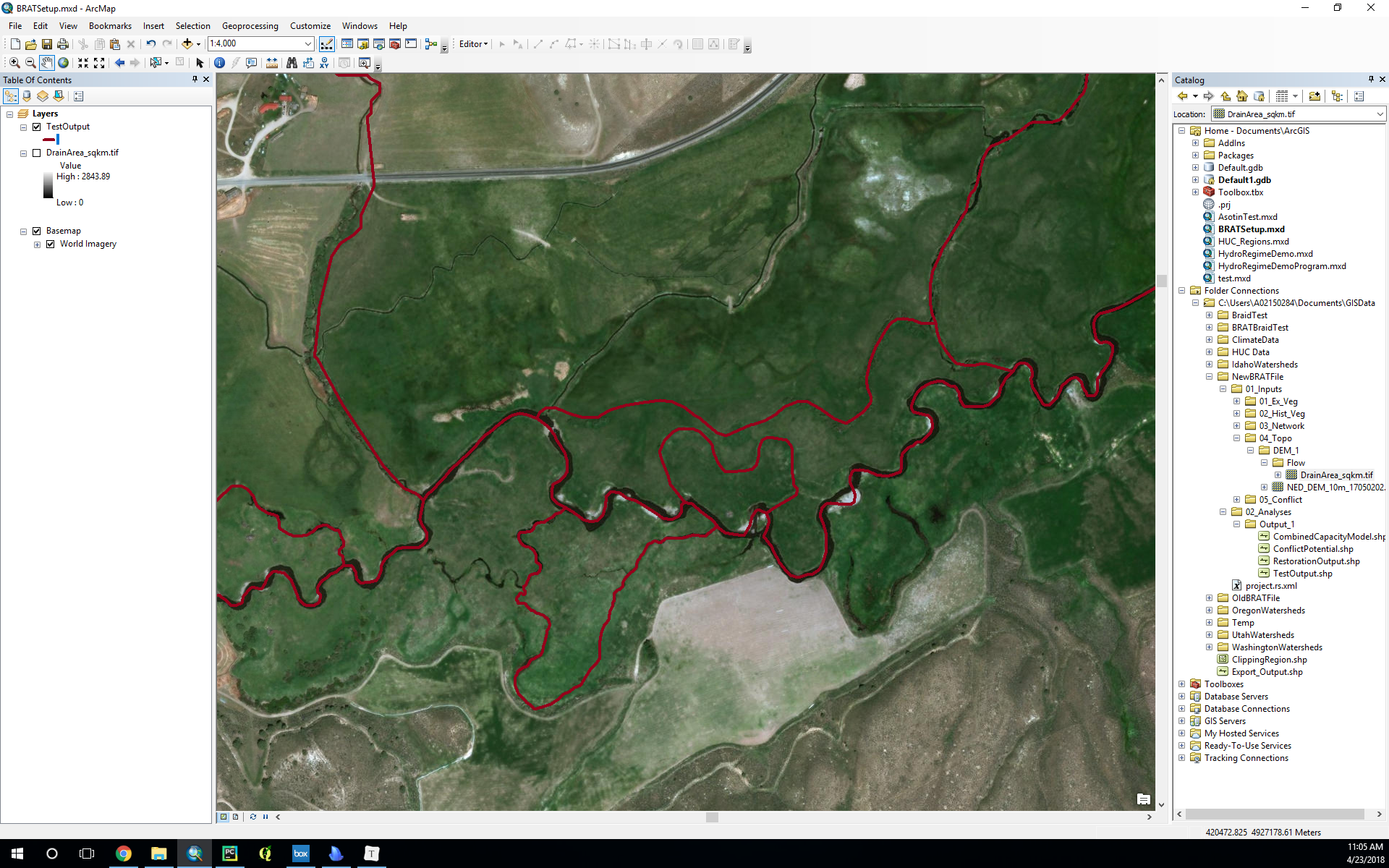 In an effort to more accurately model these sorts of stream networks, we have created an optional tool, called the Braid Handler, that identifies clusters of braided networks. It then assigns the sidechannels with a reasonable Drainage Area value and gives the dominant channel, if one exists, the highest Drainage Area value found in the cluster.

Note: Improvements in BRAT version 3.1.00 have improved the outputs such that manual editing is no longer necessary. Specifically, reaches within named stream segments are automatically assigned to the main channel. The perennial network is also incorporated into finding clusters in the BRAT table tool which also improves this process.

The Braid Handler requires the technician to go through and identify with imagery the mainstem of each cluster in the network. Because this can be a time intensive process, it is only recommended that the Braid Handler be run on watershed that contain large amounts of heavily braided streams. Outside of these watershed, the Braid Handler offers little benefit for the work put into running it.

The BRAT Table tool produces a stream network with the attributes “IsMultiCh” and “IsMainCh”. In these fields, a value of 0 is “false”, and a value of 1 is “true”. If the stream has multiple channels, the stream’s “IsMainCh” attribute is automatically assigned a value of 0 (“false”). The most efficient way to identify areas that need editing is to select by attribute streams where “IsMultiCh”=1. This will highlight every cluster of braided streams in the network. After this, go through the highlighted streams and visually identify what stream network is on the mainstem of the cluster, and set “IsMainCh” of each of those streams to 1.

Once the mainstems are identified, the user can run the Braid Handler. The only input for the tool is the BRAT table output shapefile.

The Braid Handler will set the value of any stream where “IsMainCh” is 1 (“true”) to the highest drainage area value found in the cluster, and will set the drainage area value of any other braided stream to 25 square kilometers. We chose 25 square kilometers because it is a small enough value that it will not preclude the possibility of beaver dams on that river. There is no good way to get an accurate value of the drainage area of these side channels, so 25 serves as a placeholder.

In addition to modifying drainage area values as detailed above, the Braid Handler will create a folder in 01_Intermediates called ##_AnabranchHandler, which contains a layer symbolizing the IsMainCh attribute.

After the Braid handler is run, the user can run the rest of the BRAT toolbox as normal.

Back to Step 4.1 Continue to Step 5
Back to Help